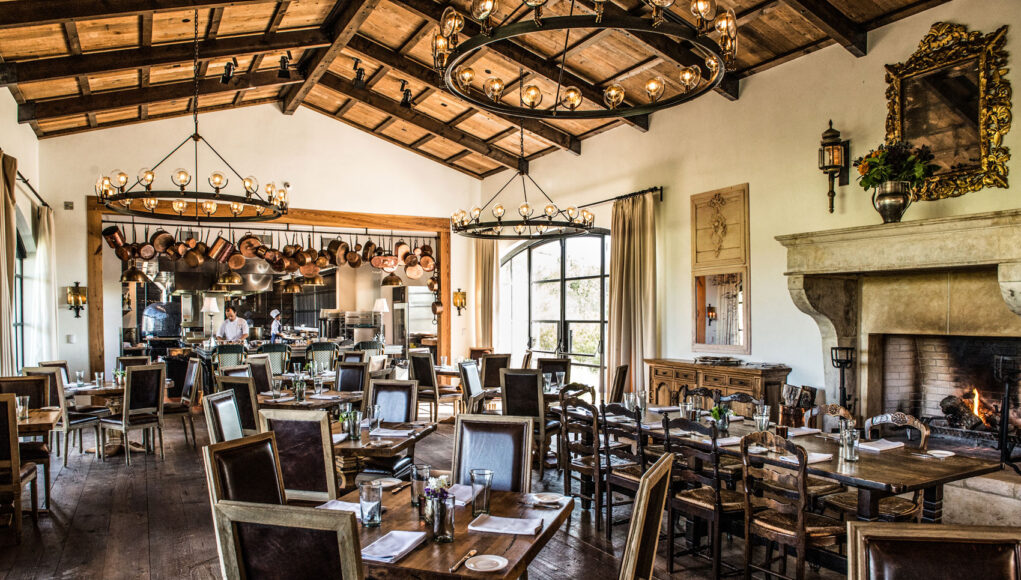 The culinary duo had worked together at San Antonio’s Chinese and Japanese-influenced Peruvian restaurant Botika Chifa Nikkei for four years when Chef Carpenter took the Executive Chef position at Signature at the lush La Cantera Resort. Chef Torres followed quickly on his heels as sous chef; an executive chef-sous chef pair trend that is becoming more and more popular in the culinary industry. 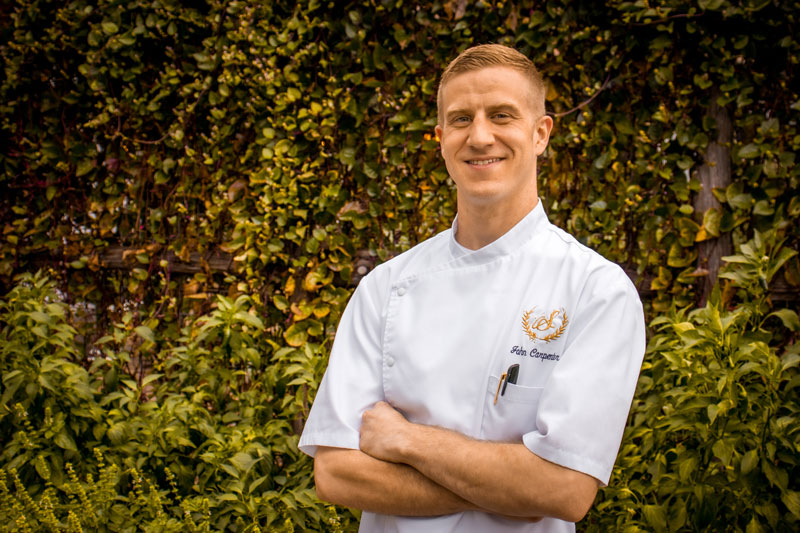 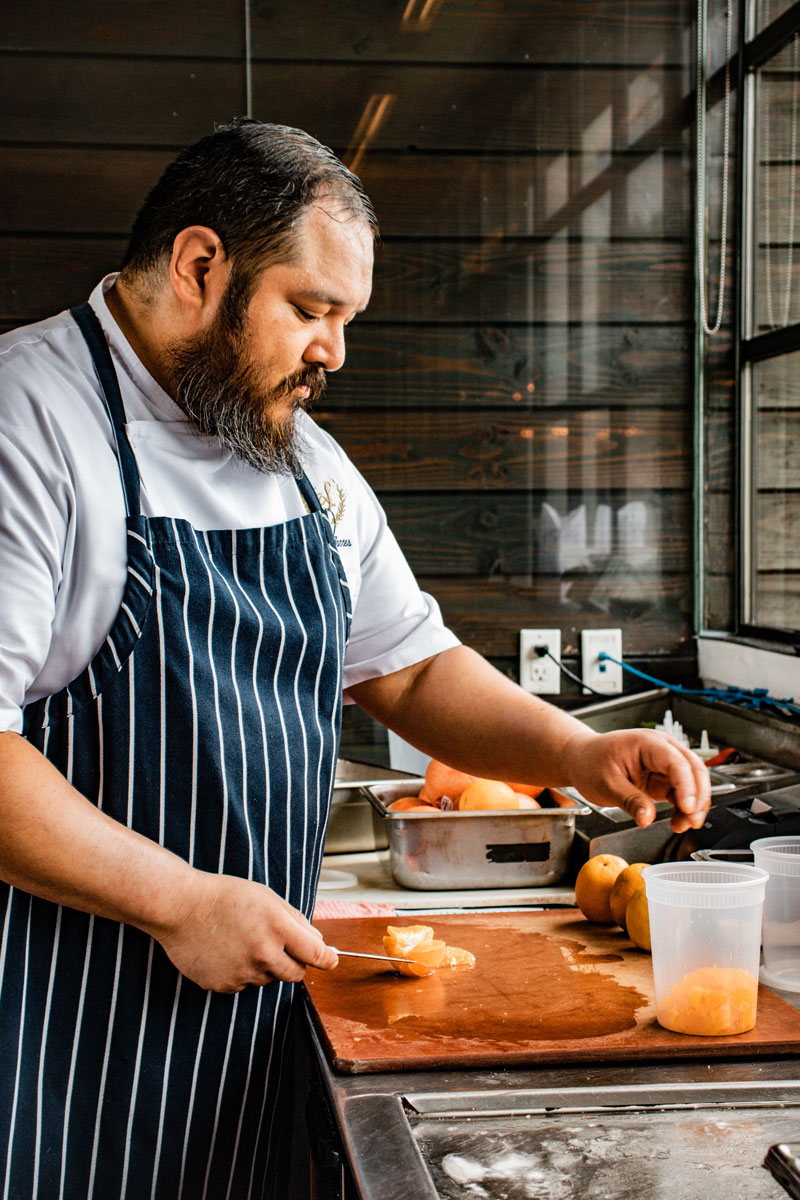 Taking part in the team makes sense across the board. It takes years to establish professional harmony as much as it does on the personal front. When there’s an organic rhythm and connection in the kitchen, you can taste it.

Chef Carpenter comments on why he feels he and Chef Torres work so well together. ‘Jaime is my sous chef, but at the same time, it’s a really even playing field. We’re just really good friends. We just gel because we are similar people but opposites at the same time. We complement each other.
We also share a great sense of humor, which is really important. We’ve just always had great chemistry. We also benefit from working really well with our other
sous chef at Signature, D.J. (Dominic Jenkins.)

Carpenter expounds on the benefits of a reliable team, ‘I’ve been an Executive Chef for almost 12 years. When you first come into the position you just want to do everything yourself.
You want to create everything yourself. You want to be the guy who does it all. And then you see how quick and how hard it becomes and you learn from your failures. You start to realize that it’s all about the team that you build. It’s not at all about yourself and how good you are. You’re not going to be doing all the cooking. Your guys are going to be doing it and you’re going to be the one sitting there tasting, overseeing, and making sure things are correct. So it’s all about building the right culture within.’

Chef Jaime Torres, a San Antonio native, cut his young chef teeth in the kitchen with his abuela and cooking for his family at eight years old. He did his best to not follow the career path of his hard-working cook father. He eventually relented to his life calling after studying Kinesiology at the University of Texas at San Antonio and working as a football referee and insurance agent. Torres comments on working with Chef Carpenter and the intentionality of positive team vibes over ego in their kitchen. ‘It’s really important to us when we’re hiring that we bring in someone who is going to support the positive energy in the kitchen. Obviously, we want someone with skill and some experience, but we’ll take somebody with less experience, but with a good attitude over somebody who’s coming in thinking they know everything.’ 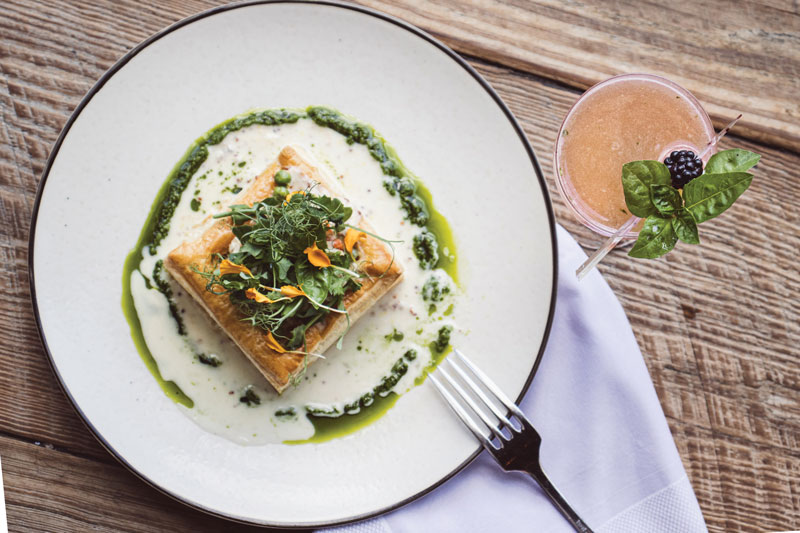 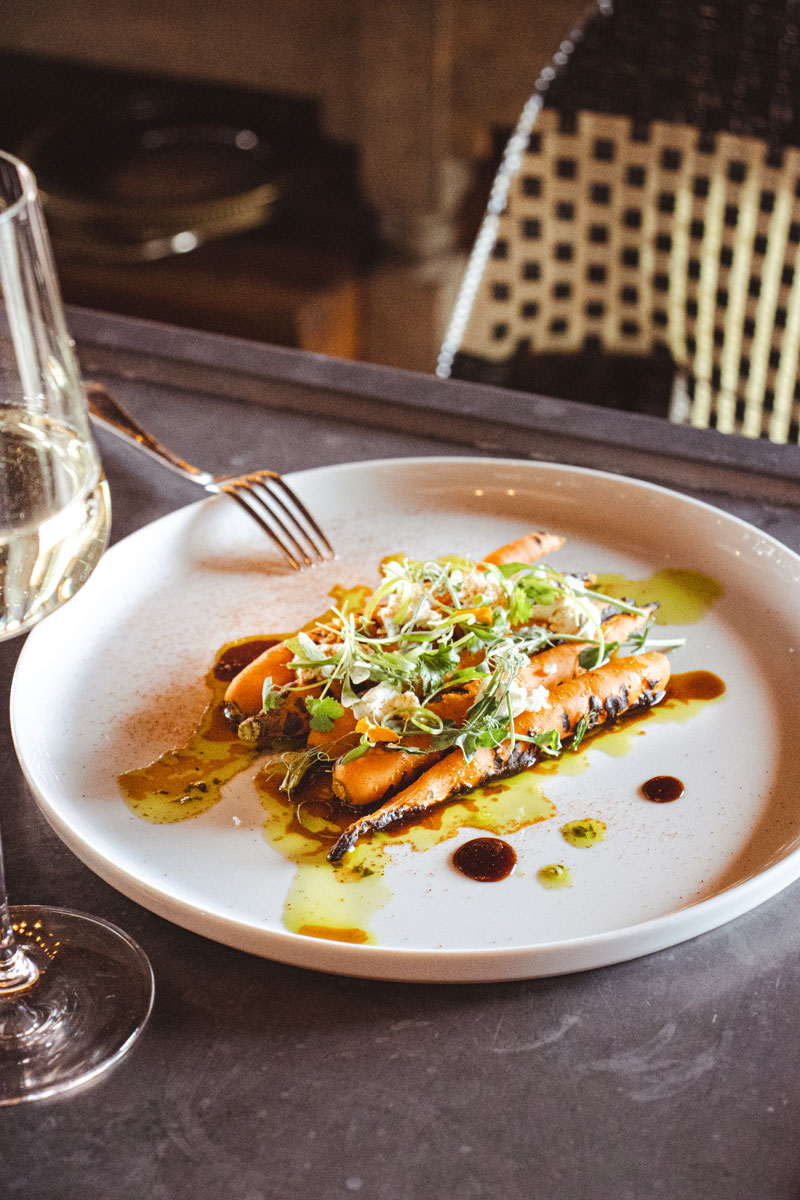 John and Jaime took their CW Magazine Q&A interview sitting out in Signature’s gorgeous patio garden that boasts endless trees and greenery that pour across the vast landscape. Jaime commented on what he feels makes San Antonio such a unique corner of the world. ‘I just think that we’re very rich in culture. San Antonio itself is 300 years old. There are just a lot of different people that have lived here throughout history from people with Mexican heritage to German heritage. We’re a military city. So there’s a constant influx of new people as well. People with different backgrounds come and like what they see and end up coming back to live here at some point. It also has that big city, small town kind of lifestyle. It’s real family-oriented as well; a very comfortable city.

John,  who used to create special menus and delight his family with original dishes when he was in middle school, shared his impressions of his country-elegant venue which is known for boasting fresher, brighter versions of traditional cuisine, enlivened with unconventional Texas spirit. ‘When I was interviewing for the job, I was just like, ‘Oh my God. How beautiful is this? If I can look out to this every day… Signature is just a  stunningly beautiful restaurant. It’s about as ideal as it can get from like a standpoint of a chef. We have our own garden in the backyard where we use a lot of ingredients, like tons of fresh herbs. Basically, the whole patio and back have beautifully landscaped flowers everywhere… We also clip a lot of flowers for garnish.’

Signature Restaurant, though part of the highly-rated La Cantera Resort, resides a mile away from the main resort and feels like a stand-alone venue. The guests of the resort arrive to Signature by golf cart. However, much of the venue’s clientele comes from the local area. Carpenter comments, ‘Fortunately we have been very highly-rated in our own right. So we don’t just bank off of being this hotel restaurant. We stand alone and try to operate in our own little fine-dining world. But we’re still part of the resort.’

The venue of Signature with its exquisitely rustic hanging copper pans and sprawl of flower-laden long wood tables with bespoke hanging pastoral chandeliers seems the quintessential dining space for the autumnal months that precede the holiday season. On the precipice of Thanksgiving, both chefs shared what they are most thankful for. Jaime, who incidentally won the Grand Championship at the Paella Challenge in San Antonio, and treats his large family to his self-cooked Thanksgiving annual event, shares, ‘I’m just thankful for my family and my friends that I speak to every day, and just being able to enjoy life.’ John, chimes in, ‘Yeah, it’s pretty much a given that what I am most thankful for is my family at this point. My wife and I have two small daughters aged six and four. Thanksgiving for us is small with my wife’s dad and my mom and our family. Everyone is used to me cooking everything. We do all the classics and it’s always really nice.’

With a stunningly picturesque venue and well-tuned rapport, Chef Carpenter, Chef Torres, and the entire culinary team at Signature restaurant offer a refreshing example of what is possible when ‘good vibes’ and ‘ego-free’ are the top priority on the menu.

Chef of the Land