For Executive Chef Emily Dillport, The Ritz Carlton’s third woman to ever earn the distinguished title, a career in culinary came by “accident.”

Emily Dillport was “poached” into the culinary world while bussing tables and washing dishes, to help save for junior college in Orlando Florida. Chef and owner Jephanie Foster, of the small, fine dining venue, offered Dillport a very intriguing proposition when she suddenly lost her most valuable line cook due to deportation.

Foster, still big in the Orlando food scene, had noticed Emily’s respectful attitude and natural ethic for hard work. Because of this, Foster extended an invite to train Dilport one-to-one to get her up to speed in the kitchen. “At the time, I didn’t know a thing about cooking!”

The mentorship was every day, all day. Getting Dillport reliably facile as a cook in a professional upscale kitchen was all-encompassing. Offered Chef Dillport, “Chef Jephanie really took me under her wing and taught me everything. When you have an example like that in front of you, you really want to do everything possible to assist them and to essentially ‘be’ them. There’s no way I would be here if it wasn’t for Chef Foster believing in me and saying,  ‘Hey come in the kitchen give it a try. I think you’d be great.’”

The hands-on culinary education Chef Dillport received with Chef Foster, along with working her way up within the ranks of Ritz Carlton Hotels and Resorts (worldwide), has made her a true advocate for obtaining culinary training in the kitchen, not in an expensive culinary school. Says Dillport, “You have such an amazing opportunity to work and learn and get paid for it at the same time. I tell young chefs having the right attitude and being committed to working hard is 75% of the battle. Don’t let anybody ever tell you that you have to go to culinary school to be successful as a chef.”

Historically, women have been allowed the “distinct honor” of cooking at home for the family while the men get the Executive Chef roles, that come with salaries, accolades, and artistic merit.

Dillport comments on the topic: “Women being ambitious in culinary is something heretofore relatively unheard of. This is all changing. We are becoming much more empowered.”

The stigma of being a woman in a professional kitchen and labeled with generic women stereotypes like,  “Okay she’s emotional! You can’t tell her this or that because she’s gonna cry…” or, “You can’t put her on this station because it will be too hard for her…” Well, this is just not the case anymore.  Women are getting stronger and not worrying about the repercussions are of saying, “I want to be an executive chef. “

Having said this, Chef Dillport admits that her road to Executive Chef was much longer and more arduous than the majority of the gentlemen she has known. Moving herself and family (wife Christine, employed with Marriott for fourteen years, and their daughter, Charlie) excessively for opportunities, and striving to be flexible to grow her career, played a key role in Dillport’s rise to the top within the Ritz Carlton empire.

Accomplishing the majority of chef titles within Ritz Carlton kitchen from Palm Beach Florida to Saint Thomas, New Orleans to Aruba, and Orlando to her present Executive Chef position at Ritz Carlton in Marana, AZ, has involved a great deal of sacrifice. Chef Dillport shares:

“I went through a lot more roles than most men in this field go through. I worked twice as hard as my male counterparts and I said yes to more work or and relocations, 100 times more than they did. I did this because I was ambitious. I was hungry. I wanted to get to the top. I wanted to get to this role, and I was going to work as hard as I had to do it.”

Beyond any kind of feminist-minded movement, it has been blatantly clear for long while now that talented, hard-working women make incredible Executive Chefs. The proverbial blindfolds of limitations are coming off and the ladies are killing it “in the field.”

One of the biggest misconceptions about being a powerful and respected chef is that one must play hardball. Women chefs in particular often feel forced to play that hand to prove their strength and prowess, especially in top positions such as Executive Chef.  Dillport commented: “Ten years ago sure, it was definitely different and I had to play hardball at times. Now I’m very fortunate that I have such a great team. When I come into a new property, my first priority is to build relationships with my team. To build trust and show loyalty, prove that I’ve got their back. We’re a solid unit and that’s the key.”

Having met fellow female Executive Chefs within Ritz Carlton Luxury Hotels and Resorts, Chef Melissa Lee and Chef Paula de Silva, Dilport had this to say,  “They set such an amazing example for people, for cooks, and chefs in general across the company with how they handle their business and how they run things. It is simply a matter of confidence. As we progress, more women are having this level of confidence, fueled by great mentors that say, ‘You know you can do this.’ We’re seeing more and more women in the kitchen moving up, and it’s fantastic. I think that five years from now, we’re going to have double the amount of Executive Women Chefs. I really believe that.”

Ironically, there is plenty of room at the proverbial table for female and male chefs alike. With the question of progress wavering across so many crucial social and political plotlines, it’s refreshing to note opportunities are heating up for our culinary women champions in the kitchen. And they’re just getting started. 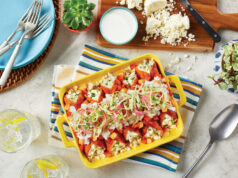 Make Your Holidays Shine with Pidy