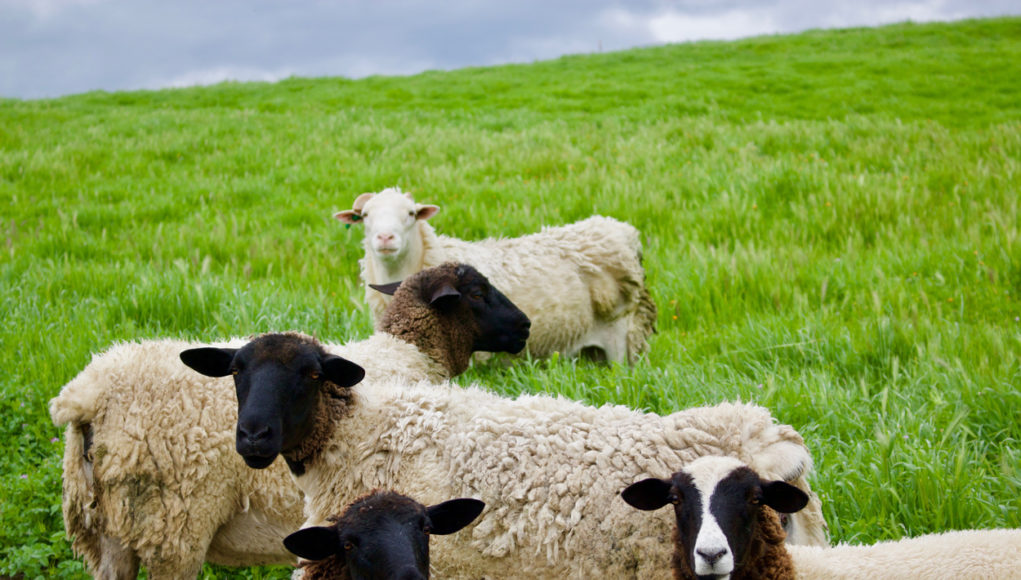 On a sun-flecked day last April, in the Montezuma Hills, on 3,700 acres that flank the Sacramento River on the Delta in Northern California, Niman Ranch hosted an educative and sumptuous Lamb Tour and Feast al fresco on the hills of the historic McCormack Ranch. It was the perfect location for CW/Del
Monte Sales Reps  to meet the family farmers of Niman Ranch responsible for offering the West Coast the very finest (respectfully raised and nurtured) lamb money can buy.

During the unique event, the golden era of family lamb farming intermingled with the newer, younger family farmer set, and offered invaluable education and stories to the captive CW and Del Monte audience.

The on-premise grilled Niman Lamb lunch, with wines poured from Pressley Vineyards (whose vineyards also make use of McCormack land creating ideal biodiversity), and tables overflowing with fresh flowers, brought home the history-steeped integrity, passion and hard work of our farmers, being at the heart of the outstanding “Center of Plate,” we are so proud to offer our chefs.

Two Professors, based in Africa and Cambodia take over a Lamb Farm in Montezuma California. 1987.

Jeannie McCormack was an only child, and was to become the sole
inheritor of McCormack Ranch, established in the late 1800s, and owned and operated by her parents, Aunt and Uncle, and a single Aunt. Jeannie shared, “I grew up here at the ranch, but I grew up in a time when girls were not encouraged to join 4H. We were meant to join ‘Future Homemakers’ and learn how to cook and sew. However, I was very close to my father and I knew I would have to come back one day and take care of the ranch, my parents, and aging extended family. Al and I decided to come back from Africa, where I was working as a Women’s Enterprise Professor and Al, a scientist, before my parents were so infirm that they wouldn’t be able to teach us anything. Al started driving a tractor and I became a sheep helper. But I knew nothing of the business.”

McCormack ranch historically used the same farming system extending back to the Isle of Erin in Scotland from the early 18th Century. “The idea was you would put your sheep on the ground. They would ‘clean it up’, eating the grass and the weeds. Then we would fertilize the ground and move the sheep on and you would grow grain on that land for the next two years. This organic interaction between the animals and the agronomy was very effective and sustainable,” relayed Al.

When in 1990, both Al and Jeannie’s father fell ill with the same cancer, Jeannie was left to fight for the ranch on her own during an incredibly trying economic period. Al offered, “Luckily, as it turned out, Jeannie’s father Bob had kept some lambs behind after we had sent the main ones off that April. We sent them out to pasture to fatten up. Thankfully the lamb that year was really good.”

However, new to being at the helm, Jeannie became frustrated looking for a market to grab to sell the lamb. Out of desperation, she got her mother’s Christmas card list (the oligarchy of SF) sent out an invite to buy their lamb. She was amazingly successful with this and sold off all 50 lambs.

By the next year, Al and Jeannie’s father were recovering and with all hands again “on deck,” they decided to pursue the business again. However, as it turned out, Jeannie’s mother’s Christmas Card list had saturated the market. It was a great challenge to find anyone else to buy their lamb.

Jeannie commented, “In the process of looking around for a market, I was just calling randomly around for restaurants and Chez Panisse jumped in and wanted to buy whole carcasses. Around the same time I enrolled Zuni Cafe and Rouge Cafe in Berkeley into buying and the owner of Rouge Cafe, Marsha McBride, became such huge fan that she introduced me to Bill Niman and the rest, as you say, is history.”  Al added, “The Wall Street Journal said that year that our lamb was amongst the best in the world.  They called it Niman Lamb. They didn’t mention us, but we were the ones who brought it.”

The Crux of the Niman Family
Farming “Community”

An unexpected turn for the McCormacks was that their lamb became so successful under the Niman name that they could not meet supply. Al shared, “Our Niman mentors helped us out enormously at this time. Soon we came to rely on meeting the demand of the market by incorporating the lambs produced by the Anderson and Hamilton Families.”

This family ranch collaboration and support is how the united family lamb farmers of Niman Ranch began. Of course, all farmers under the Niman name must be strictly audited and agree to Niman’s strict protocol regarding quality product and animal welfare, including no stress management, and no hormones/antibiotics. They must also share a commitment to the land and valuing the animals.

“I speak for the farmers who are doing everything possible to be sustainable. We are very grateful to CW/Del Monte for taking the time to know and share where your products come from.”

“I could have been born anywhere in the world, and for me, there could be no better place to spend my 64 years, as a fourth-generation farmer than right here in the Montezuma Hills. I am lucky enough to get to sit in the same claw-tooth bathtub after a hard day’s work as my great grandfather. How many of you can say that?  The ability to sustain this beautiful land for future generations is the reason I’m here today. On my farm operation, we have about 2,500 Ewes. My best go-to Niman.” -Ian Anderson

“Our family farm was established in the 1870s. Our land extends from the Delta to land rich with the last growing native grasses in the Sacramento Valley. It is our mission to protect the native species that inhabit Jefferson Prairie. I’m the fourth generation, my kids are fifth, and we even have six generations on the ground now. We are aligned with Niman because they are heavy into
verification and this transparency is important when you put a value to it.” -Richard Hamilton

“I’m a fourth-generation sheepherder. My family, who originated in Scotland, started farming on the South Coast of Oregon in 1880. My grandmother was a very strong, independent lady who had nine children. We were brought into the Niman program out of survival for our business. Niman Ew protocols are exactly what we have always done. Though I was nervous about it initially, our audit with Niman was no big deal because our protocol was the same: very high standards of farming, doing everything the right way.”

Farmers are the true heroes of this industry we all so love. Thankfully companies like Niman Ranch make it their mission to support integral farmers in every way possible to ensure sustainable, high-quality C.O.P. (Center of Plate), and family farming, for generations to come.