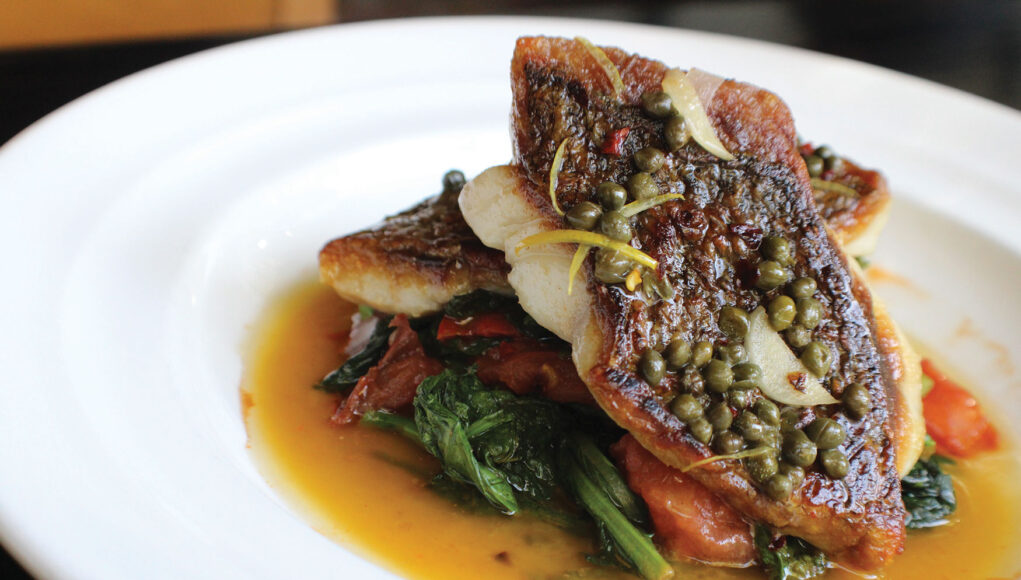 Perhaps it was being raised by loving, hard-working migrant workers who didn’t stand for laziness and didn’t offer handouts that had Executive Chef Vincent Sanchez of Harvest Inn in St. Helena keep listening to his gut.

Raised in Gilroy and observing his parents tend farms and work fruit stands, Sanchez grew up with a natural affinity and respect for fruits and vegetables. “We always just had fruits and vegetables in abundance. That was our life. There’s 30 farm stands around Gilroy, but each is unique in their own way. But this is only true if this is your world, your reality. I realized this the first time I took my soon-to-be wife to our family’s fruit stand to get some strawberries. To her, all the fruit stands were the same, but for me, each of them were very different having to do with the hard working people who ran them, their history, and what they sold. This had a big impact on me growing up.”

Bussing tables at 13 to make his own spending money, Sanchez, was a self-confessed “trouble maker.” Despite scholarship offers and his mother’s tearful disappointment, Vincent turned his back on college and hit the high road to visit his brother Mateo who was attending culinary schooling in Boston. Vincent shares,  “I realized that restaurant kitchens were a place you could always work, no matter your background, and also a place you would always be accepted.” 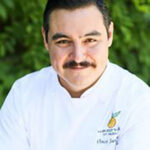 Chef Sanchez’s first bit of luck occurred when the instructors at his brother’s culinary school, a CIA affiliate, took Vincent under their wing to observe classes and even eat with the enrolled students.

After moving back to Gilroy, and securing a job at a local steakhouse as a cook, Sanchez tasted his first dose of kitchen reality. Vincent shares,  “I just got my ass kicked up and down by a bunch of Hispanic guys that worked there and were like, ‘This guy’s our supervisor? He’s 20 years old! How is he our boss?’ They were like, ‘We’re gonna throw you on this station.’ And they watched me get my ass handed to me over and over and over.”

Having witnessed his brother fall instantly into debt after graduating from culinary school, Vincent took Mateo’s advice and decided to achieve his culinary education by learning while cooking.

A colorful journey of experience followed, calling for Chef Sanchez to follow his intuition in regards to his career trajectory. From learning about authentic Italian ingredients and cooking by a master mentor named Lorenza, to opening a restaurant produced by an inexperienced software tycoon, followed by a quick stint
cooking at a nudist resort, Vincent found himself cheffing in the corporate world of
Marriot. Sanchez offered, “Yeah, that big corporate lifestyle wasn’t feeling like a good
fit for me. Just too many rules.”

With his sights on working with the top brass in the Bay Area’s illustrious culinary world, Vincent applied for a tremendous amount of high-end, well-reputed venues zoning in on Italian cuisine. This pursuit led him to Acquerello (now with Two Micheline Stars) in San Francisco, which would become a real game-changer in Chef Sanchez’s career. Vincent shares about the day he got the “big call” by the “whole new fishbowl.”

“I think I probably sent my resume to Acquerello seven times. And then finally…it was my day off. I was eating a bowl of Cheerios in my girlfriend’s bed in my underwear.  It’s funny because I remember this so acutely. But that was the call. That was the day that changed my life. Chef Suzette Gresham called me, and she just said, ‘Hey Vince, I’d love to get you in here, does tomorrow work?’ I said, ‘Absolutely!’ And before I even got the job, I called the Marriott and said,  ‘I don’t think this is going to work out.’ I literally put all my eggs in one basket. Acquerello is where I really cut my teeth in the kitchen. It was hard, but I learned a ton. I eventually became the Sous Chef there. I was just stubborn and willing to work stupid hours. Chef Suzette introduced me to the big leagues, the James Beard awarded, the Michelin starred; folks like, David Kinch, Dominique Crenn, and Ron Boyd. Just so many cool chefs. We’d meet at The Fairmont in San Francisco, wineries in Santa Cruz, etc. I just got stepped up to a whole new bowl of fish. I realized I was just the smallest little fish in this huge pond. So, I just put my head down and worked.”

After just over a year, Chef Sanchez made the painful decision to leave Acquerello for reasons he chose not to have included here. “Leaving Acquerello was one of the hardest decisions I’ve ever had to make. Chef Suzette and I sat down and we just cried. I’m even kind of tearing up now that I had to move on. But that’s what had to happen, and it sucked because two months later they got their second Michelin star.  I was just like, ‘f-ck.’ But it was cool because Chef Suzette called to congratulate me and I was like, ‘Chef, I don’t even work there anymore. And she said, ‘Yeah, but none of this would have happened without you.’ So you know, it was really touching.’ Chef Sanchez offered.”

With his time at Acquerello having raised his “game” to a distinctly higher level, Vincent found himself happily at ‘one-of-a-kind,’ Oliveto in Oakland, California. During this time he also “did a stint in Italy for culinary experience.”

Getting slowly priced out of Oakland and San Francisco, along with the insistence and
support of Vincent’s wife’s parents to get away from the crime-heavy Oakland neighborhood where they were living, Sanchez started a new life, professionally and otherwise in Napa Valley diamond Yountville, CA.

After a year of trying to make the daily commute from Napa to Oliveto’s in Oakland, and then working at Thomas Keller’s Ad Hoc in Yountville 24/7, Vincent found himself disillusioned and contemplating not cooking anymore. Sanchez shares his brief career divergence. “I took some time away from being a chef and worked at my “in-laws” chocolate shop for a little bit as a chocolatier. But sooner or later, I really wanted to get back in ‘the hot seat.’” After leading the forge, cheffing over 60 weddings with Girl and The Fig Catering for over a year, Sanchez was beginning to wonder if he was ever going to find his “sweet spot” in culinary.

Reaching out for his next opportunity, Vincent called his friend, Chef Dominic, over at Silver Oak in Healdsburg, California. Chef Sanchez shares the fate coming to call conversation, “I just said, ‘Hey you got hours?’ Dom was immediately like, ‘Yeah, of course, I got hours for you. But I’m gonna send you a number, and you got to call this guy right now. Like today. His name is Sean Hyer. He’s the food and beverage director at Harvest Inn Resort in St. Helena. We’ve been talking about you for a while!’ And so I called Sean right away. Best call I ever made. And that’s how I found myself here as Executive Chef at Harvest Inn. It just kind of happened. I guess I am supposed to be here for some reason. As hard as it has been here with 2020 and everything going on, coming aboard here was the best decision I’ve ever made. This place has really helped me to grow these past five years. I owe it to our food and beverage director Sean Hyer and our GM Nathan Davis for how they have guided me with a soft hand, and at times with the hard hand, but really helped me to grow as a manager, a chef, and a person.”

After decades of hard work and not settling for a work environment that wasn’t an ideal fit, Chef Vincent Sanchez has happily found his professional home amidst  the towering redwood trees in the heart of St. Helena at the “enchanted Harvest Inn.”

As spring’s bright bounty unfolds, Sanchez now focuses on his greatest inspirations: introducing his clientele to the magic of California produce (a longstanding passion from his boyhood in Gilroy), crafting his compelling menu, and enjoying every moment with his wife and three and four-year-old little ones. Here’s to every season having a reason. And enjoying the journey (and ingredients) along the way.

The warm weather has finally returned to Northern California, and so has the dining scene!  We are excited to see our restaurant partners open their doors, and are thrilled at the opportunity to help them build back up.  Despite the myriad of challenges everyone has faced this past year, the resilience and fortitude of the restaurateurs shine bright with the long-awaited reopening of the market.

We are very fortunate that our dynamic region of Northern California boasts a wealth of local destinations to travel to. From the mountains and blue crystal water of Lake Tahoe, the wine regions of Napa, Sonoma, and the Central Coast, coastal gems like Carmel and Santa Cruz, to the incredible world city that is San Francisco, Northern California is primed to bounce back to even greater heights than ever before.