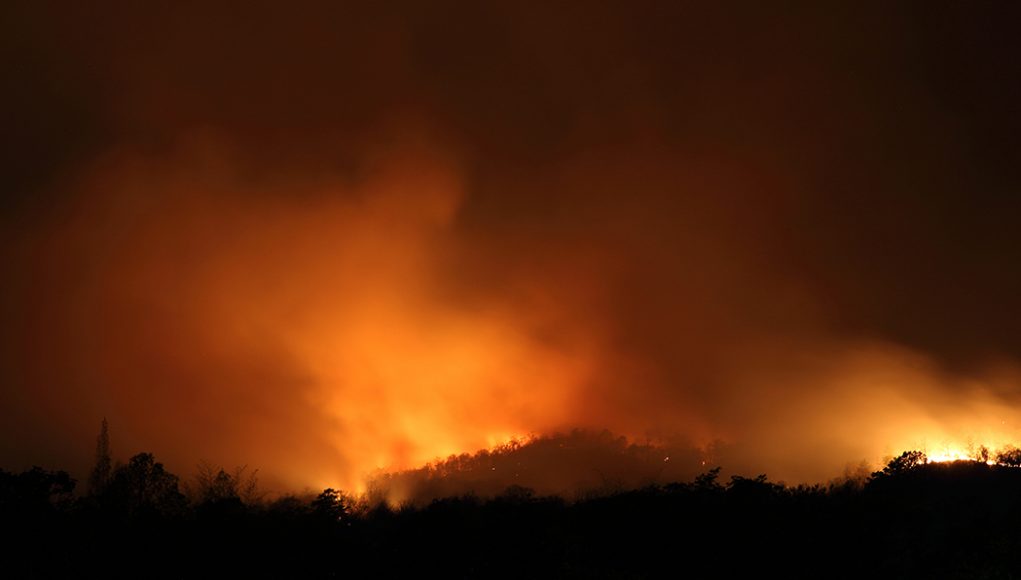 The Chefs’ Warehouse and Del Monte Meat Company were honored to “do their bit,” this October during the record-breaking devastation of the North Bay Fires, by donating ingredients by the truckload to aid the efforts of heroic volunteer chef organizations: Mercy Chefs and Napa Valley BBQ Relief.

Everything important in everyone’s life
happens over a meal if you think about it. Every celebration,
family tragedy, every relationship connection,
it all hovers in over a shared meal.

From the North Bay Fires, Mercy Chefs’ site, at The Christian Family Fellowship in Santa Rosa, you could easily see (and smell) the fire-ravaged neighborhood of Coffee Park, an area now synonymous with total devastation. Only days before, this had been a bright and buzzing community, where family and friends cherished the place they called home. Now, like something out of an apocalyptic film, the victims of the horrific North Bay fires wander the street in shock, now homeless. The perfect time, perhaps, to sit down with the community to a wholesome and delicious full meal prepared by Mercy Chefs.

Mercy Chefs’ Managing Chef Lisa Saylor, still reeling from her three-week experience managing the M.C. site in hurricane-destroyed Rockport, Texas, shared that 2017 is the most unprecedented year of natural disasters that Mercy Chefs has seen in its eleven-year history.

Saylor, who had met Jack Mancino from Hudson Valley Foie at Mercy Chefs’ Hurricane Harry Relief Effort, was on the way to Puerto Rico when Mancino reached out to inquire if Mercy Chefs could set up a relief site for the North Bay Fires. Saylor was on a flight to California the next day. Following this, Mancino also contacted Nikki Thomas and Mathew Mosebrook at The Chefs’ Warehouse to ask about CW support potentials to aid Mercy Chefs. Thomas and Mosebrook jumped at the opportunity for CW to be a major contributor in ingredient donation, offering everything from meat to dessert and everything in between. Multiple Vendors including White Toque, California Olive Ranch, and Clover Dairy stepped up as well.

Saylor expanded on how crucial donation funding is to Mercy Chefs’ efforts. “We are a Non-Profit, faith-based group. We do not get help in the way of support from grants, government money or FEMA, so donations, like we have received from The Chefs’ Warehouse, are crucial. This help allows us to stay for longer and offer thoughtfully prepared meals to victims and first responders who are going through so much and need a lot more than a plain ham sandwich and a bag of chips.

It is everyone, and I mean everyone doing their bit, whatever they can to help, that gets us through catastrophes like this. That’s what it’s all about. Together we can overcome anything.”

After being evacuated from their family home in Calistoga, with his wife and four-month-old daughter, Pit Master Vince Sanchez from Woodhouse BBQ Catering, felt deeply compelled to do what he could to help feed the growing fire-tormented masses.

Vince jumped to action and along with Jim Modesitt of Big Jim’s Barbeque and Operation BBQ Relief, began calling together a brigade of BBQ proprietors they knew near and far.

More than a week after the fires, an exhausted and still shaken Sanchez shared, “We could not have done what we did without the help of so many companies coming to the rescue donating products. Del Monte Meat Company alone donated 1,700 pounds of meat, just a staggering amount. Napa Valley BBQ Relief (empowered with help from Operation BBQ Relief), ended up making 33,000 meals in 12 days for fire victims and first responders.

One thing I learned about the county of Napa,
and people in the food industry, when something
happens, they help out. It really
gave me a sense of community
and restored my faith in humanity.
At every turn, everyone was saying, ‘Yes.’”
-Chef Vince Sanchez
Woodhouse BBQ Catering

Echoing Sanchez’s experience, The Chefs’ Warehouse, Del Monte Meat Company (and constituent companies), and the West Coast community has never experienced a heart-wrenching disaster on the level of the North Bay Fires of 2017. The only positive perhaps is the unequivocal acts of human generosity and kindness inspired by the events that brought to the forefront how powerful we can be when we work together for the common good.

CW wishes to offer sincere condolences to all
who lost so much in the devastating fires.
Let us be empowered by the strength of unity
and compassion as we move forward to heal and rebuild.

The Beauty of Bellwether Farms