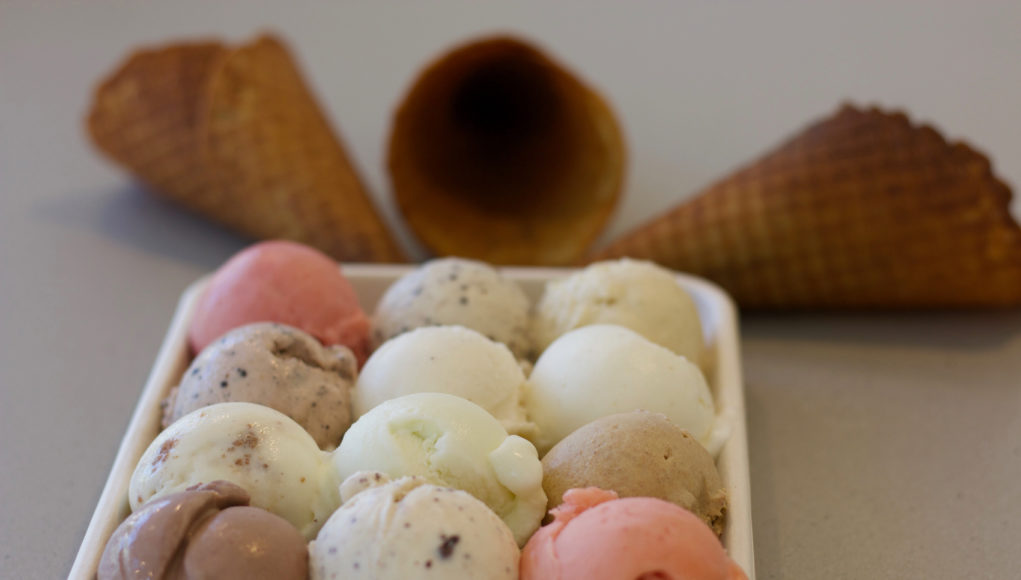 KYLE CAPORICCI, Owner/Chef of (haute) ice cream and dessert destination Posie, in Larkspur, CA, is only at work on “awesome”.

STEPPING INTO POSIE, with its stark clever white tiles, industrial drop-down lighting, woodshop stools, spacious “bar’’ and cool menu verbiage on square alphabet blocks, your attention is immediately grabbed by the flavors of the day. This is your first clue. This ain’t your grandma’s old school ice cream shop. As late, great Mr. Bourdain would say: “This ladies and gentlemen, is distinctly something else.”

I’ve been wanting to write up a feature on Chef Kyle and Posie since I crossed its threshold when it opened three years ago. I was instantly plugged into the artistic vibe, enigmatic-luscious ice cream selection, and stacks of mega cool, arty food books and magazines stacked on the communal table.

Kyle was immediately generous in conversing about his creative offerings and journeys of making them. From his local foraging, on-site pasteurizing, (Posie is one of a few Bay Area ice cream shops licensed to pasteurize ice cream base in-house), flavor-combo-conjuring, mixing, freezing, and his original (totally addictive and gluten-free) waffle cones, to say nothing of the plethora of exciting pies newly on offer, Kyle resonates with a tatted out Willy Wonka edge, and ego-free nature.

Kyle offered, “This is what I think of when I think of California cuisine. I don’t just think of fruits and vegetables. I also think of herbs and flowers and everything that is in season at the same time.”

I had the pleasure of sitting down with Chef Kyle earlier this fall to get some back story on him and the gastronomic gem that is Posie.

“When I was working at Commis (Two Michelin Star Venue, in Oakland, CA,) I knew I wanted it to be my last restaurant job and that I wanted to open up my own business. It was just that time for me. Like, you know, suddenly everybody around you is 21 and coming back from their holiday in Denmark or whatever and I was heading into my 40’s.”

Down Low Of Owning Your Own “Show”

“You know the power at our venue went out on Friday for like five hours or something. We had to close and go get dry ice and cover everything…this is how we lose money. And we’re spending on dry ice… Employees are standing around like, ‘Yeah, yeah, yeah…’ It all comes down to me. I’m not a plumber but I’m learning so much about refrigeration. It’s constantly, like always something, you know? Like, I got a new like payroll company and it’s cheaper but then I gotta write the checks myself and I don’t want to. I just want to cook. So it’s all about trying to find that balance.”

Telling Our Stories and Busy Bittersweet

“It’s been really busy lately. It’s super good and great, but then at the same time, I don’t want to be so busy that I’m like, dying. Maybe I need it to be that way financially but at the same time I really like talking with my customers and I think it’s really important. We wouldn’t be as popular if we weren’t available to tell our stories. Carter, who works here, is really good at this, answering questions like, ‘Why do we call our vanilla ice-cream ‘Very Expensive Vanilla?’ He tells them the true story about storms in Madagascar and how it affects the vanilla that is grown there. Everyone appreciates the story behind what they’re experiencing and I think it has them get into what they’re eating even more.”

“Most people don’t get to make their own mixes and a very small percent of ice cream shops pasteurize their own like we do here at Posie. We get to come up with different recipes, try different things. The more we learn about our machine, the more ideas we come up with. Like, we can add different cultures just like you would make cheese. We can make a funkier base. Right now we have caramelized milk. That was an idea, born of compromising condensed milk, like milk jam or clotted cream: milk cooked at a high temperature. We’re actually cannibalizing the milk solids in the dairy. These are very expensive machines. We might as well figure out how to use them for their full potential.”

Craftwork To The Core

“Grandpa had a garden and I would always help him in the yard. He’d grab a fresh pea and say to me, ‘Oh, try these peas they’re the best when they come right off.’ It didn’t hit me until I was older, but I realized with my grandparents, we always went to the one place that carried the one thing. The butcher for meat. The Barber for a haircut. Etc. Craftsmen.”

“Initially, I wanted to be a butcher. I liked meat, but it was basically just a job. At 19, I bothered the sh-t out of this butcher shop in San Jose (Zannatto’s) until they finally hired me. I always thought I was so f-cking cool with my knives and butcher coat. It was there that I started learning to cook and discovered that I had a good palate; started to feel like I might have some talent.”

“I think I got into cooking because I was very into art. I did a lot of oil painting and illustrating. Then I saw people on TV making sugar and chocolate sculptures and I was like, ‘Wow, that’s really cool. I could do something that I enjoy doing and make money.’”

As Fate Would Have It

“To be honest I dropped out of high school at 16. I was just really bored. I ended up working in construction before I found my way to working at the butcher shop, then another butcher shop, then into cooking and eventually for some reason, Google hired me as a line cook for a new restaurant that was opening up. And somebody that worked for Google knew the owner of the culinary school that I wanted to go to and they told him that I was doing a good job so they invited me to go to school and made it possible for me financially. I have always gone to the doors that open for me.”

“I had a cooking instructor at culinary school. Nice guy, and fortunately he liked me. He would tell me all the time, ‘You can’t reinvent the wheel. Cooking has been around forever. All you can do is take a recipe and make it your own and do little tweaks to it.’ That was around the time Anthony Bourdain put out that documentary ‘De Coding Ferran Adrià (from legendary El Bulli, Barcelona, Spain).’ I was like, ‘Whoa, like this sh-t is dope!’ These dudes WERE reinventing the wheel. I was working at Google in the kitchen, and we would stay after work and just f-ck around and get creative with ingredients and inventing new techniques. It was like, magic. This was the first time I was making something and experimenting and was like ‘Whoa, it actually works!’ So I did my internship after school at this cool place called Bong Su, an upscale Vietnamese restaurant in the city (S.F.). They were really into like, modern cuisine. I was secretly reading about it and said some stuff out loud one day and they were like, that’s kind of cool. So we really started hanging out and kicking around ideas and bringing those ideas to life through a lot of trial and error. That’s when I realized that I only want to work for restaurants like this. I have had many amazing mentors. I just realized I only wanted to work with people that wanted to be awesome.”