the bar:
Butcher and The Rye, Richard De Shantz’s downtown Pittsburgh, PA gem offers contemporary riffs on rustic American dishes with an extensive whisky collection. Butcher And The Rye is the first Pittsburgh bar to be nominated for a James Beard Foundation Award for Outstanding Bar Program since the category was created in 2012.

the mixologist:
Michael Anderson (The Butcher And The Rye, Pittsburgh) is the full supreme mixologist package. Hailing from Louisville, Kentucky, with classic gentleman style and proper country ‘tache, Anderson garners a brand of professional charm, skill, and tailored attention that only a 14 year restaurant, 8 year mixologist veteran can offer. 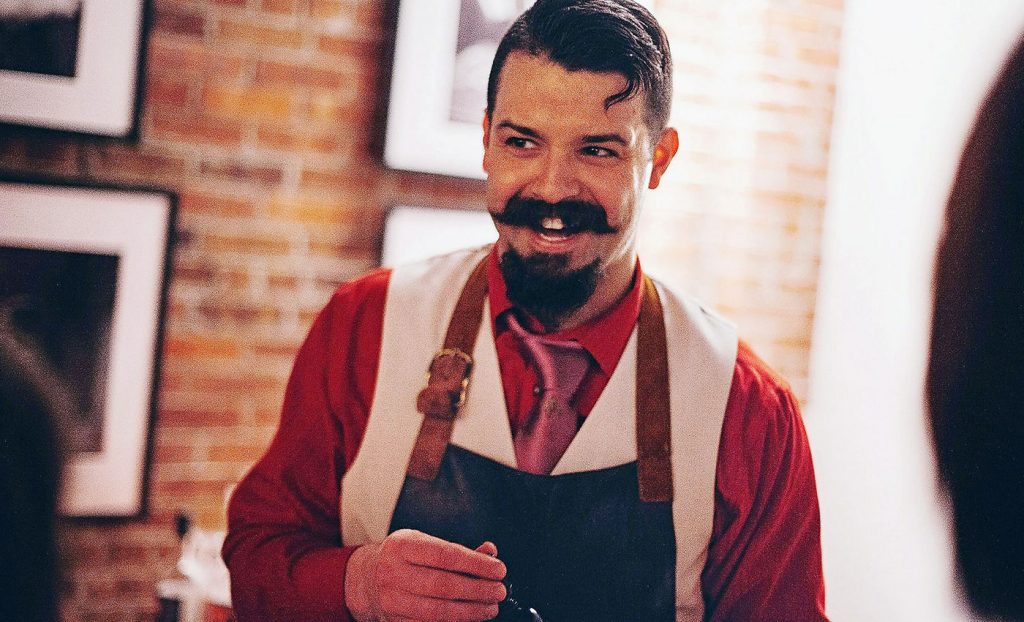 philosophy:
‘I’m always looking for new and interesting ways make the final product be approachable to who is sitting at my bar. You have to know who you’re playing to. For every one person that loves complicated cocktails with pomegranate shrubs, saccharine and citric acid, a thousand people just want a Long Island Ice Tea.

‘I can do the mustache and leather apron, and be that, but it’s not to create this energy of an arrogant type guy. Sure, being a mixologist is about pushing boundaries, but it’s not for everybody. Folks come in on their special night, ready to spend their hard earned money; show their friends this cool place they know about. You don’t want to intimidate them with ingredients they’ve never heard of. You want them to have fun and be excited, offer them something relatively in their wheelhouse. ‘

go to drink:
‘The last thing I want to do when I’m not working is watch somebody put together a complicated cocktail. I can’t separate myself from what I do, so this is just not enjoyable to me. If, I’m in another city, at a new place, I’m interested in seeing what other mixologists are doing. But if I’m just hanging out on my day off, or after work, I want something very simple and clean, like a cold beer and a shot, or wine, which I’m also very interested in.’

a competitor:
*This coming April Anderson has been selected to compete in New York City for Pama Del Maguey Vida Mezcal, with The Spectrum Cocktail, one of Anderson’s latest signature libations.

on the down low:
Being a competitive mixologist- bartender can be very consuming. You need to have an escape from being ‘on’ all the time. I love it, but I had to learn how to compartmentalize and create time for self preservation and health. I used to be be a competitive swimmer and am pretty in to having healthy life so I swim a lot and practice yoga several times a week. It’s my personal yin-yang.

Bridor: Quality and Consistency on ‘the Rise’